As usual the paid News reporter Sandhya Ravishankar published one Article with ulterior motive. From our Association, we registered our objection to the media which is given below for our members information.

From: Pauldurai Perumal <president@beachminerals.org>Date: Fri, May 11, 2018 at 1:51 PMSubject: Objection to Sandhya Ravishankar Article published in your media on 10.5.2018To: legal@huffingtonpost.in

This has reference to your articles published in HUFFPOST on 10.05.2018 as “Exclusive : Atomic Minerals found in Tamil Nadu Beach Sand Samples Meant for export, says report”.

At first we want to mention that, the author Sandhya Ravishankar is working with the competitors of Tamilnadu Beach Mineral Producers. Some of the overseas competitors also close in hand with her. The River Sand Mafia who want to usurp this industry also financing her to spread false rumors against this industries.

So whatever Sandha Ravishankar wrote, normally she cook the story with 99% imaginary and 1% fact. Already number of criminal cases filed against her by our association members for publishing false news.

In your news, she has mentioned that, the possibility  of using monazite to extract nuclear grade Thorium. Please note all over the world no place Thorium is used to convert Uranium or it is not used in Nuclear weapons. All the countries are in the research. Number of researches are going on just like to run the car by sea water and to produce Uranium from sea waves and even from trees (Link : http://www.beachminerals.org/uranium-can-produced-various-items-iaea-report-reveals-fact/  and https://engineering.stanford.edu/magazine/article/how-extract-uranium-seawater-nuclear-power)

Like that this is only research stage. But to prejudice the judiciary and Govt., machinery and public Sandhya has wrote this.

She further mentioned that, certain samples found to contain monazite higher than the prescribed limit. What is the prescribed limit? Where is the notification?  Without any documentary evidence is it fair to publish such type of news? All these are naturally occurred beach minerals. No one has control over the same. You can find out the reply from DAE. (attached)

The monazite is not permitted for export. It is in negative list. Every port has the facilities to find out the radioactive materials and monazite in another minerals. All the vehicles should pass through the scanner and in case any unwanted material or monazite is found, that mineral will be detained and it will not be permitted for export. You can find out the said fact in http://www.beachminerals.org/tuticorin-port-trust-has-scanner-to-find-out-radioactive-materials-uranium-thorium-monazite-or-other-unwanted-materials-used-for-export-until-now-no-such-materials-found-in-the-export-cargo-tutico/

The monazite content is very high only in Manavalakurichi,   west coast of Kanyakumari district and not throughout Tamilnadu. The said Manavalakurichi area is leased to IRE Ltd, a Govt., company. The East coast area were leases granted to private companies content monazite percentage less than 0.5%. As per the Atomic Minerals Concession rules 2016, wherever the monazite content in the total heavy mineral (THM) is more than 0.75%, only the government entities are allowed to mine and produce the minerals and no private entity is allowed to mine such deposits.

Monazite contains 0.35% of uranium, 8-10% of thorium and 65% rare earths. Rare Earth is today’s sought after material and China is dominating the world with a 95% share. Just now only Indian Govt., get the technology from Japan for cracking monazite. Accordingly IRE Ltd is establishing the same in Orissa State.

There are different isotope of Thorium and Uranium. The Thorium and Uranium available in the monazite is Th-232 and U-232. Which could not be used for any purpose. But it is a radioactive material, a health hazard. So no country will permit import of monazite. Some countries previously purchase monazite from IREL for production of rare earth oxide. Now they stop the purchase. Hence IREL stop production of monazite from 2004 itself.

The Uranium used for power plant or other purposes are U-235 or U-238. Like that, researches are going on all over the world to find out whether, this type of thorium can be used for any purposes, just like the other research that whether sea water can be used as fuel for car. But without mentioning the isotope of the Uranium and Thorium available in the monazite, our competitors and amicus simply told that, Thorium and Uranium are fuel for Nuclear power plants, so to protect the same, beach mineral mining should be stopped.

Monazite is freely available all over the world. Hence IREL itself stop production in 2004.

The cost of monazite is less than other minerals. Since monazite is negative list of export, it cannot be exported either direct or indirect way.

All export products, random samples will be taken by the customs and analyzed their lab. If radioactive material is found, automatically the customs authority will black list the exporter and he cannot export in future. Hence no one will burn their finger for a meagre amount.

Any heavy mineral found to contain even traces of monazite is automatically rejected by the customers, as, all the countries are prohibiting import of radioactive material.

Every ship has separate scanner and alarm facilities to find out radioactive material to protect the employees of the shift as they will sail it in months. So there is no possibility to export monazite or thorium in any of the ship directly or indirectly blended with other mineral. Real fact is, no party will export monazite. But this wild allegation is made only with ulterior motive to prejudice the authority and judiciary.  Every persons from DAE and AMD knows that Thorium cannot be used for illegal purposes and cannot be exported. They have issued two press releases refuting the allegations.

All the above allegations are a tailor made false allegation to curb beach mineral export which is a competition to them.

Sandhya Ravishankar has mentioned about the Sahoo report. In fact the Honourable High Court has directed the registry to furnish copy to the parties advocates to submit comments on the above said reports. Till today our members did not receive the copy through their advocates as most of the advocates fly to other places for vacation. So without going the same, no one can give any comments on the same.

In fact, the above fact have been replied to her by some of our members. But she wantonly hide the fact that she received reply. We don’t know how Sandhya can able to get a document from the High Court without order from the Honourable High court when the matter was sub-judice. For your reference I separately forwarded the reply send to Sandhya and the acknowledgement send by her.

In fact, some of our members requested her to send the report copy with annexures if any so that, they can send their comments. The said mail was acknowledged by her. But you have not reflected the above facts in your news.

So kindly publish our clarification in your media and send the link for our reference.

Our Association members already applied to Govt., of India to grant permission for Value Addition for the same. If private participation is permitted in this field, then only India can dominate in this industry and there is possibility for superseding China also. Will Govt., of India introduced MAKE IN INDIA scheme in this field? 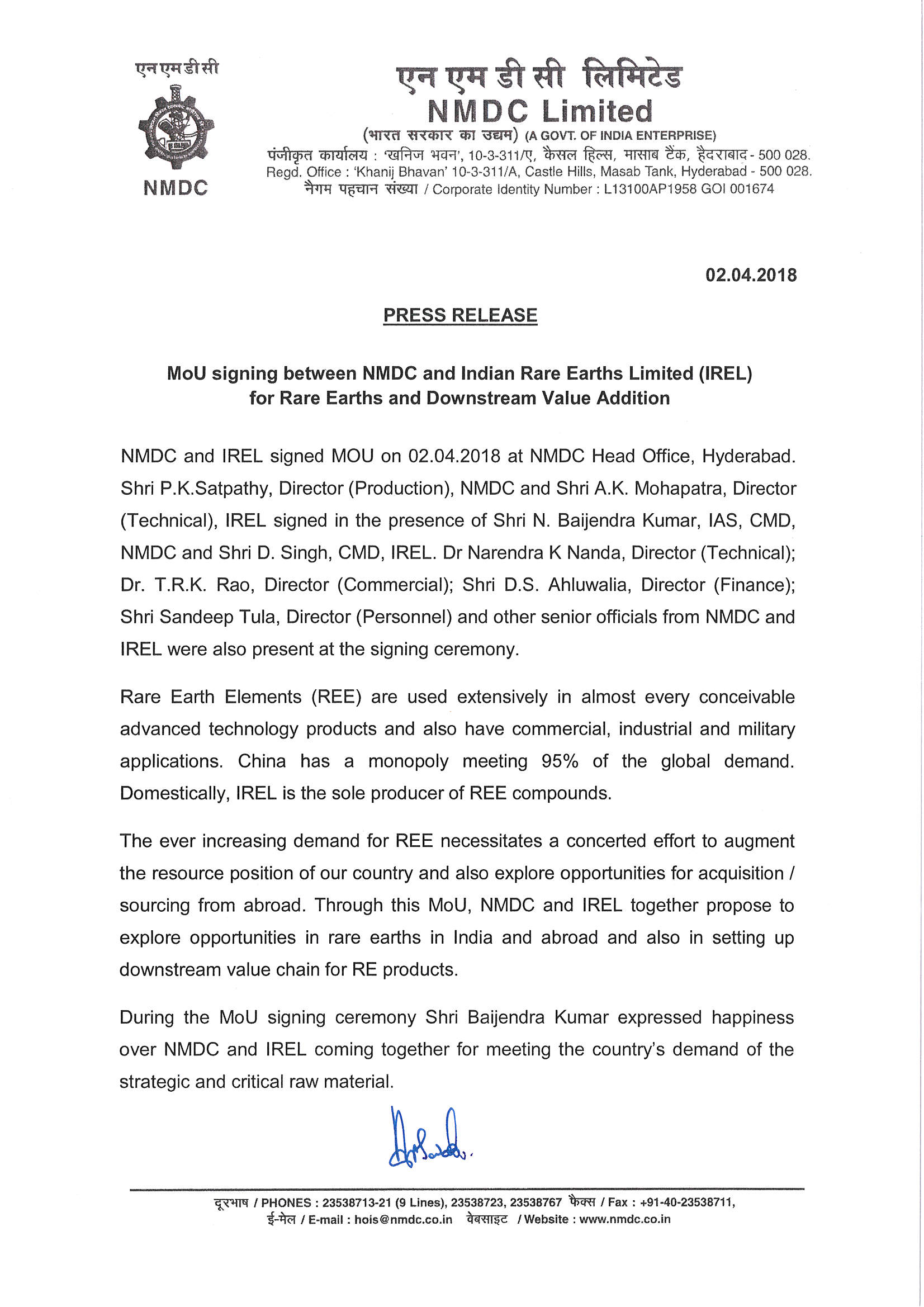