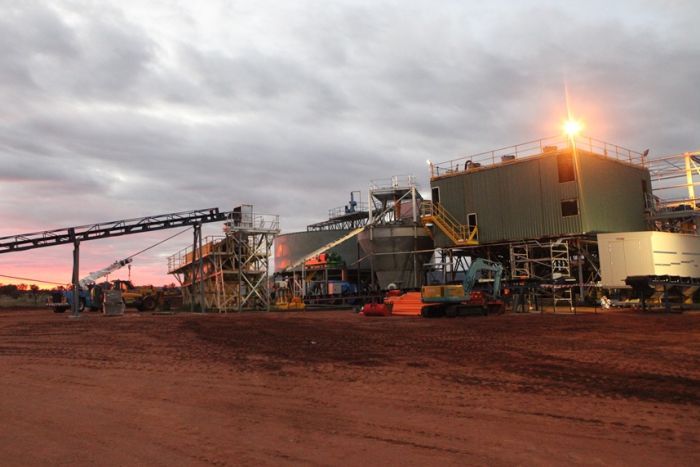 PHOTO: The Hartz Range mine, which is located approximately 200km from Alice Springs, is a significant project for the global garnet industry. (Supplied: Australian Abrasive Minerals.)
MAP: Alice Springs 0870

Harts Range Garnet Mine, which is located approximately 200 kilometres from Alice Springs, has reached a major milestone after reaching its production phase.

Australian Abrasive Minerals commenced exploring for garnets in early-2010 and found the world’s largest alluvial deposit of garnet, which is used industrially in blast cleaning, water jet cutting and various other mining applications.

Chief executive Robert Brand said the Harts Range project was a huge win for the surrounding local communities, as the mine became a major source for the global garnet market.

“There’s only five major garnet mines in the world and the other three are located in India, so this is a significant mine for the worldwide garnet industry.”

“It’s unique, it’s valuable, it serves a good opportunity for Indigenous employment, it makes a significant economic contribution to the local region and that will go on for a long time.”

A pioneering project for the Territory

Mr Brand said the Harts Range Garnet Mine was the first mine to be developed in the southern part of the Territory in more than 30 years.

He estimated the Harts Range Garnet reserve would have a mine life of at least 29 years at full production and presented many export opportunities.

“This particular mine, similar to other garnet mines around the world, is characterised by very long life mines that keep producing for a long time,” he said.

“There’s a considerable upside on that, there is more mineral available on our mineral lease that will support a mine site for a further 30 years.

“One third of garnet production is consumed within Australia and two thirds is exported principally to the United States and also to Europe.”

Mr Brand said there would be significant employment opportunities for the Indigenous communities surrounding the Harts Range Garnet Mine.

“The mine is within four kilometres of the township of Harts Range [and] it’s approximately two hours drive by road from Alice Springs, therefore we operate a drive-in, drive-out operation whereby all of our workforce will be sourced from around the region,” he said

“At the moment one third of the workforce employed at the mine site is Indigenous labour and we’re quite keen to see those ratios are maintained.

“We’ve conducted, in the last two months, intensive training for the local Indigenous employees and they are very supportive of what we’re trying to do.

“I think there’s a good endeavour for both sides to make this a success.”

Mr Brand added there would be economic benefits for local contractors, suppliers and small businesses.

“As well as employment we source local contractors to do work for us,” he said.

“We have local suppliers and service providers that provide us with goods and services for maintenance and ongoing operation of the plant.

“And our village will be using the local general store at Harts Range, for example, for all of its purchases and that will have a direct impact on the local community.

“The most important thing about this mine is [that] it’s sustainable for the long term and there’s benefits that will continue for a long time to come.”