Thorium: the last great opportunity of the industrial age

It is a significant fact that half the protein the world eats has its origin in fossil fuels. We are all aware of the green revolution that, amongst other things, saw dwarf strains of wheat increase yields by a couple of hundred percent. There was another revolution in agriculture sixty years prior to the green revolution. That was the development of the Haber-Bosch process of combining hydrogen and nitrogen to produce nitrogenous fertiliser.

The plants that produce that fertiliser, the source of half of the protein we eat, run on natural gas or coal. One day these fossil fuels will run out. Does that mean that half of our population starves? It does if we don’t have a way of producing nitrogenous fertilisers cheaply using something other than natural gas or coal.

And it won’t be sunbeams or wisps of the wind that will keep people fed. Those things barely pay for themselves, if that. Take the case of the Ivanpah solar facility in California built at a cost of $2.2 billion. Rated at 392 MW, Ivanpah is a near 20-fold scale up from the previous largest solar thermal facility of 20 MW in Spain. Despite all the engineering that went into the design of Ivanpah, it operated at least 40% below design in 2014.

The chief economist of the International Energy Agency, a warmer by the name of Fatih Birol, once said ‘One day we will run out of oil, it is not today or tomorrow, but one day we will run out of oil and we have to leave oil before oil leaves us.” What is true of oil, the liquid fossil fuel, is also true of the solid, coal, and the gaseous form, natural gas. One may quibble about the detail but the overall effect will look something like this: 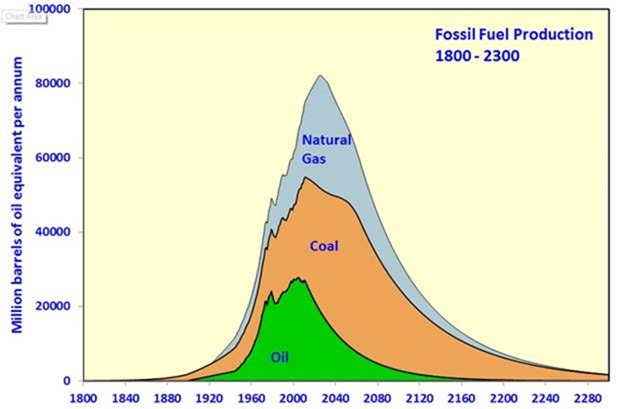 Oil production will be the first to start the long decline to oblivion. We can fix the problem of declining transport fuel availability by a form of alchemy that converts coal into gasoline, diesel and jet fuel. And we will be doing that. But it will be another short term fix until the coal runs out. You might think we have a lot of coal. We had a lot of oil too, once – until we burnt it. Converting coal into the transport fuels we need will double the rate of our coal consumption. And our coal endowment will be largely gone in our grandchildren’s lifetimes.

If we combine the data from Figure 1 with world population growth, we get this figure: 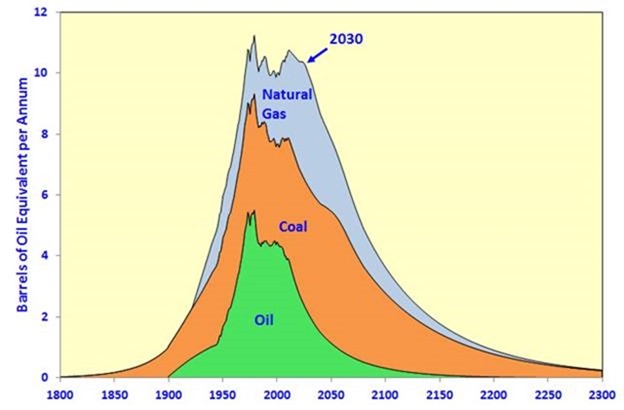 Per capita fossil fuel production falls off a cliff in 2030. Projections of agricultural land available to be brought into production suggest that the system might cope with growing demand at least up until the late 2030s. Fossil fuel availability though indicates that prices will start accelerating well before then.

There is no alternative – nuclear energy is the only energy source that has any prospect of making good the looming fall in energy supply. Only nuclear power has any hope of being cheap enough to provide the energy to cook up the slew of chemicals and fuels we need to maintain our high standard of living. But it won’t be nuclear power as it is commonly understood. That is power plants burning U235 and using water as the coolant. Civilisation took a wrong turn way back in the 1950s when that technology became dominant in the nuclear power industry.

There are a number of reasons why it was a wrong turn. Firstly, U235 is only one thousandth of the nuclear fuel available to us. The best nuclear fuel, thorium, is eight hundred times more abundant. If you like to believe in a Creator who made the earth as a paradise for us to inhabit, U235 is the nuclear match made for us to light the fire that will sustain civilisation indefinitely. We are still burning that nuclear match though and we should have already moved on from that.

The second big problem with nuclear power plants running on U235 is decay heat. You can’t turn off nuclear power plants instantaneously. They continue to produce heat for a while after the reactions have been shut down. If the cooling water doesn’t circulate for some reason during this period, then there is a good chance you will get a hydrogen explosion. This is what happened at Fukushima which had three reactors blow up due to hydrogen explosions.

The question now being asked about thorium reactors is, if they are so wonderful, why haven’t they been developed yet? The only major company that once expressed an interest in developing molten salt thorium reactors was Teledyne Brown. There are a number of startups in the thorium space but none seem to have traction yet.

Perhaps the reason is that nobody has looked past the development of a commercial thorium reactor, a wonderful thing in itself, to the enormous commercial opportunity that follows from that. Let’s assume that each thorium power plant is 250 MWe, the same size as the conceptual design at Oak Ridge National Laboratory 50 years ago. Assuming no economic growth that required a higher rate of build, just replacing declining fossil fuel production to 2100 would require the building of 14,500 units at 250 MWe. The build rate would get to about 300 a year by mid-century. The rate could be 30% to 40% higher than that if carbon-based transport fuels are going to be created from hydrogen from electrolysis and carbon scavenged from forestry and agricultural waste. Also assuming that each unit lasts for sixty years before it has to be replaced, then the ramp up of replacement units in the second half of the century is just as fast as the initial ramp up as per Figure 3 following: 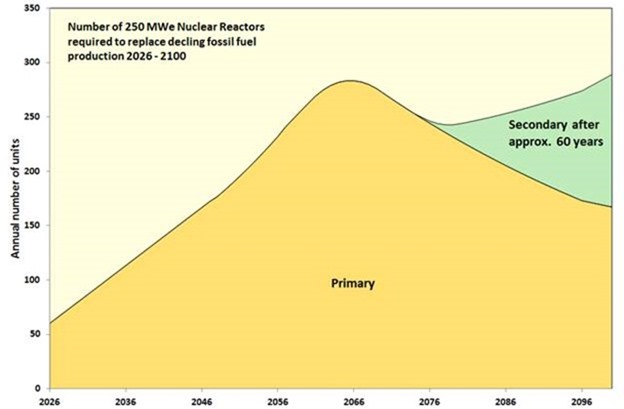 Thorium molten salt reactors, without the need for all the backup safety systems that U235 nuclear plants have, should be no more expensive to build than coal-fired plants. This is an overnight capital cost of $3,246/kW as opposed to U235 nuclear at $5,530/kW. At that rate, a 250 MWe plant would cost about $800 million. Building 300 per annum would provide a revenue of $240 billion per annum.

To put that in perspective, in the first quarter of 2015 the commercial division of Boeing sold 184 aircraft for $15.4 billion. That is an average revenue of $84 million per aircraft. The list price of a 737-800 is $93.3 million. Annualised, Boeing has a revenue of $60 billion per annum from its commercial aircraft division. Our prospective thorium reactor builder would become four times larger in the base case.

That will be the reward for saving humanity from a bleak future by developing the thorium molten salt reactor – owning an enormous industrial enterprise.