ODISHA COAST CAN BE CENTRE OF EXCELLENCE

ODISHA COAST CAN BE CENTRE OF EXCELLENCE

With innovations galore, the coast of Odisha can become a centre of excellence. Believe it or not, this was opined by C Swamydas, one of the founder members of Indian Rare Earth Limited. He is hopeful that one day, there will be flurry of downstream industries in the coastal region of Odisha once the Government permits private players to enter to the rare earth materials.

Because of their unique magnetic, luminescent, and electrochemical properties, these elements help make many technologies perform with reduced weight, emissions, and energy consumption, and give them greater efficiency, performance, miniaturisation, speed, durability, and thermal stability.

“Odisha has a good amount of rare earth availability in its beaches. A policy of rare earth mining to the private as well as public sector can create huge impact in the field of innovation, employment and revenue generation. Being a very capital intensive business, the sector can bring in more and more investments in the field of innovation,” said Swamydas.

Rare earth elements are used extensively in the industries like aerospace and defence, healthcare, clean energy, electronics, transportation and vehicles, chemicals, oil refining and manufacturing.  While rare earth elements are used for lasers and resolution technologies, these technologies are critical to modern aerospace systems. Rare earth permanent magnets have facilitated an evolution in health and medical technology such as MRIs that enable doctors to diagnose illnesses that otherwise would be much harder to detect. Yttrium is used in solid state lasers and in cancer-treating drugs. Rare earth elements are used in many advanced energy technologies, including wind turbines, electric car batteries and energy-efficient lights, CFLs and LED lighting. These rare earth elements make color displays more vivid in televisions, computer screens, and other devices. They are also vital for in-ear headphones, microphones, loudspeakers, optical fibers, smartphones, and tablet computers.

The utility of the rare earth has become so vital in modern days, the planned mining of rare earth in Odisha coast would give impetus to State’s economy in terms of investment, employment and innovation, Swamydas added. He feels that the Government should come out with a policy of leasing out the simple mining process to the private and public sector units which would promote downstream industry in the area. 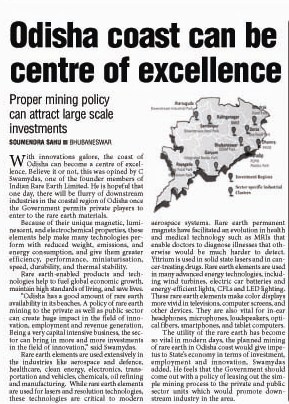