New rules for atomic minerals in the offing

New rules for atomic minerals in the offing

With the new mining law putting a question mark on the fate of private rare earth mineral sector, the Centre is gearing up to come out with rules governing leases of atomic minerals. These rules will define the threshold of radioactive content beyond, which private companies will not be allowed to mine. It will also define the concession period and the area to be given out on lease.

The Union mines ministry has engaged SBI Caps to legally vet the new set of rules, which will define the legal framework for such minerals. Under Section (3) of the Mines & Mineral (Development & Regulation) Act, the current rules apply to all minerals, except minerals notified as minor minerals or minerals specified in Part A and Part B of the First Schedule to the Act. Part A includes coal and lignite, while Part B constitutes atomic minerals.

The department of atomic energy also regulates minerals that are below the radio activity threshold to address concerns relating to health.

Although a senior mines ministry denied the private sector has been kept out of mining certain rare minerals, which were harvested by them earlier, the Beach Mineral Producers Association has represented to the government against the recent changes, which have disallowed lease of further areas to them.

There are 71 beach mineral mining leases in Tamil Nadu. The total area under such leases is around 700 hectares. The industry association says there are pending application of beach minerals involving approximately 5,000 hectares of land. Officials, however, maintain certain lease area violates the Coastal Regulation Zone rules and so could be approved for mining.

Sand mineral mining was in the public sector for around three decades. Certain minerals were de-listed from the atomic mineral category and the private sector was allowed in the business in January 2007. The recent changes, however, did not follow the same trend and listed llmentie, rutile, zircon, leucoxene in Part B of the first schedule (atomic minerals).

Tamil Nadu-based VV Mineral is India’s largest garnet miner and exporter. These minerals are used in ceramic and higher technology items. The origin of these minerals is traced to the Western Ghats. High-speed wind carries these to the sea, while waves deposit it along the beach. They are then harvested for industrial use under leases issued by the state governments. Kerala and Tamil Nadu are considered to be rich in heavy mineral reserves. 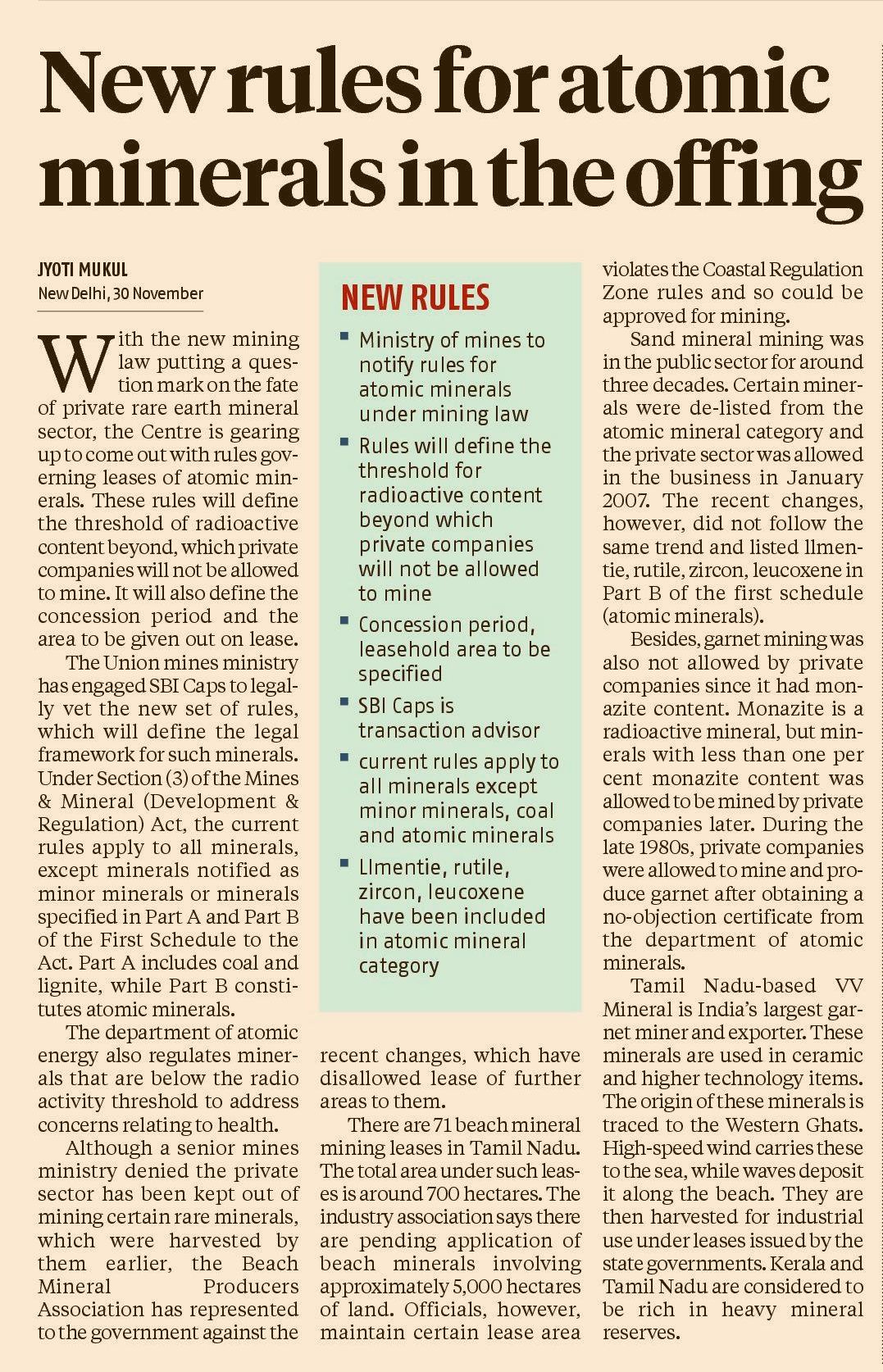