June 1, 2016 | UPDATED 21:50 IST
Bhubaneswar, Jun 1 (PTI) With the government mulling various measures to reduce dependence on import of atomic minerals, beach sand miners have voiced concern claiming the move will keep even the existing businesses out of market.

The government has floated the draft paper titled The Atomic Minerals Concession Rules, 2016 inviting comments on allowing the states to auction atomic minerals which have radioactive content below a threshold limit.

“The very concept of threshold limit value (TLV) is unscientific and seems to have been arrived at arbitrarily without fundamental principles. Basing the entire future of beach sand minerals (BSM) industry on this single factor is highly lopsided and irrational,” S Vaikundarajan, Secretary, Beach Minerals Producers Association said in a statement.

“This TLV criterion is purely to safeguard government organisations and hide inefficiencies and ineffectiveness. This is also totally against national interest, which disregards the benefit that will accrue to the nation in the absence of this TLV clause,” he said.

As per the draft, leases of existing operators will be terminated if they are not government organisations in case the TLVs exceed norms, he said.

“This is completely wrong. Existing operators have already spent crores of rupees on setting up various facilities and infrastructure. Terminating existing leases on such insignificant and inappropriate grounds will be a major setback for the BSM industry. It will also reduce foreign exchange earnings heavily and increase foreign exchange outflows tremendously,” the association secretary added.

BSM generally includes ilmenite, rutile, zircon, garnet, monazite, leucoxene and sillimanite. Most of these minerals occur together, their individual contents varying from deposit to deposit, with the major mineral in most deposits being ilmenite.

Beach sand mining in India is more than a century old. The first mining began in 1908, when beach sand containing monazite was mined and taken to European nations from the erstwhile Travancore state.

“Bring BSM as contemplated in the draft amendment to the MMDR Amendment Act 2011, and have a suitable monazite policy to safeguard conservation of monazite and allow private as well as foreign companies to exploit BSM deposits as per the guidelines.

“If these rules are implemented, fix the TLV limit as 5 per cent monazite in Total Heavy Minerals (THM) of the deposit,” said Swamydas, who was on a visit here recently, adding that the mining concession shall be given only to parties with surface rights. 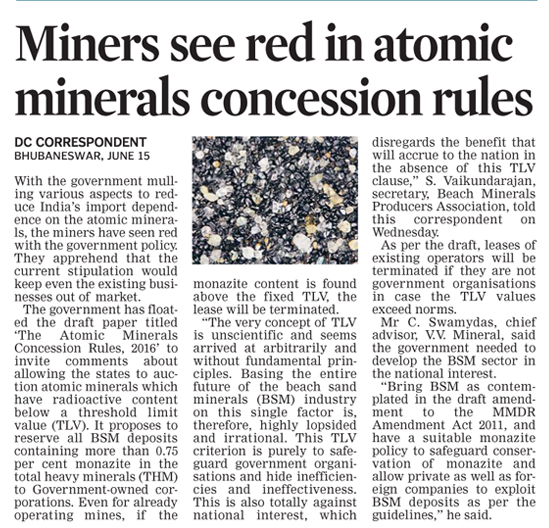