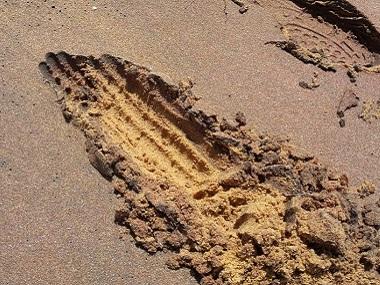 With the strangulation of rare earth supplies by China, India’s beach sand-mining industry has received a fillip to develop and expand.

However, there are several hurdles: Government regulations aside, beach sand mining is a much misunderstood industry that has caused concern in the past. For example, the image of mining in the public mind involves massive trucks carrying off earth and large depressions in the ground caused by excavations. This is believed to damage not only the environment, but also the beauty of southern India’s beaches. Beach sand-mining is quite different in many respects, and it is an important industry whose development is vital not just for India’s economic health but also strategic interests.

One of the misconceptions about beach sand-mining is the assumption that it involves quarrying. This is patently false: Companies that operate in this field in southern Tamil Nadu, for instance, dredge only the top inch of beach sand. Any deeper, and they would be mining for silica, which is neither a rare earth mineral, nor of any use to the industry. The skimming is done every morning, usually between 4 pm and 12 pm; each day, the sea deposits fresh layers of rare earth minerals on the beaches and by evening, much of it is washed away if not harvested.

The source of these minerals, however, are the Ghats – these minerals are found in the rocks in quantities too small to extract profitably, but natural weathering erodes the deposits which make their way into streams and rivers and to the ocean. The breaking wave deposits the heavier minerals further up the beach but the back wave carries the lighter minerals ashore and deposits them closer to the water.

This partial sorting of minerals based on their weight explains the striations of colour that can be seen on the beach.

Of the superficial inch, somewhere between 70 and 80 percent of the sand collected is returned to the beach after a primary filtration process. Rare earths, as their name suggests, exist in very small quantities in the sand and most of the day’s collection is gangue material. This filtration is usually done very close to the mining area so that the volume of material transported to the factories is less. The collection is sifted through a trommel screen and then put through a concentrator unit that uses the principle of gravity to separate the heavy minerals from the sand.

Although there are several minerals that yield rare earth elements, the beaches of Odisha, Andhra Pradesh, Tamil Nadu and Kerala are more abundant in seven – garnet, ilmenite, leucoxene, monazite, rutile, sillimanite, and zircon. These ores, when processed, yield niobium, tantalum, titanium, thorium, and other elements important for a wide variety of industries such as electronics, energy, plastics, paints, construction, shipping, paper, and nuclear. China dominates the rare earths market with 97 percent of the exports but even at a meagre two percent, India is the second largest exporter of rare earths. With Beijing’s recent restrictions on rare earths exports, prices have increased and several countries such as Japan, France, and the United States are interested in the development of Indian rare earth deposits.

At the factory, the rare earth minerals are extracted using various techniques based on their physical properties. The raw material is sorted using only magnetism, conductivity, and gravity to separate the six or seven minerals. High tension and magnetic separators extract ilmenite, monazite, rutile, and garnet while zircon and sillimanite are separated by their specific gravity in spiral concentrators and wet tables. At no point are any chemicals used in the separation of these minerals though other ores occurring elsewhere may require it, such as separating sillimanite from quartz. The extracted minerals may be further processed based on quality; for example, electrostatic plate separators, air tables, cross-belt magnetic separators, very high intensity magnetic separators, and rare earth drum separators can refine the minerals using the same principles that were used to extract them. 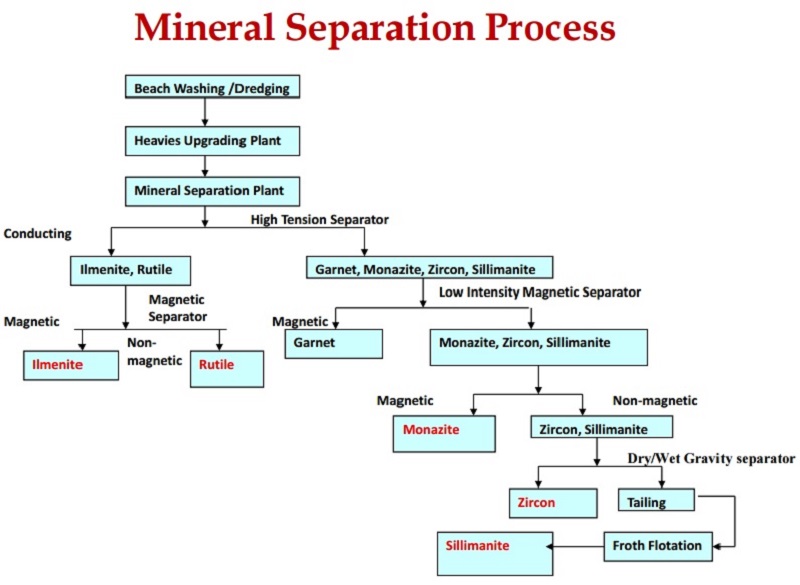 The entire process can be made to have a low impact on the environment.

For example, VV Mineral, a Thoothukudi-based firm, uses the natural Tamil Nadu sun to dry the minerals rather than use large, diesel-powered kilns. Furthermore, the water used in the separation process is treated and recycled. What few tailings are generated are dumped into a small pond of recycled water where the sand bed will act as a natural filter. VV Mineral, India’s largest garnet and ilmenite exporter, has also won several awards and certifications for its environmentally friendly mining processes. Furthermore, its corporate social responsibility involves employment of local youth, health coverage, education, and several other services to the area.

Admittedly, processing rare earths to obtain their elements is a chemical process. However, this is different from beach sand mining and only few of the firms, usually public sector undertakings, involved in one engage with the other.

The government is now considering further opening up the mining of rare earth minerals to the private sector.

This is to reduce dependence on foreign imports necessitated by the abysmal failure of PSUs to develop and expand domestic mines and processing plants. The expansion of private sector presence from lighter rare earths to heavier rare earths is one of several important steps India must take towards achieving capabilities across the entire chain of products. With good geological data, existing firms may wish to expand their portfolios or new players may be interested in entering the market.

A market-oriented policy would have a strategic international impact in that purchasers will have an alternative vendor to China. Given the importance of some of these materials to sensitive fields, India’s value as a partner will increase and allow the Delhi to leverage its ores for important technology and other benefits. Rather than cast accusing glances at the beach sand mining industry, it must be incorporated into the ‘Make in India’ national strategy for self-reliance.