India can become No.1 in Rare Earth Production by permitting Indian players – What prevent lobbying China prevent this when they are permitted defense?

India’s Rare Earths resource wealth is likely to overtake China’s wealth. But for many years, Chinese Entrepreneurs kept some of India’s anti-social elements, money-making journalists and corrupt officials at bay. That is because China holds 95 percent of the world’s Rare Earth Production and is intimidating all countries. China is exporting Rare Earths to the United States to meet 80 percent of US requirement and controlling the United States.

Modi has negotiated the technology for Rear Earth Production with the Japanese Government and currently Toyota (Japanese Company) is the only Joint Venture Company established in Visakhapatnam. Its Annual Production Capacity is only 4000 tons. But India alone needs about 8000 tons per year. India currently Imports Rare Earths worth about Rs 35,000 Crores, that means such amount Foreign Exchange outgo from India. Rare Earths are used in all types of Latest Appliances such as Aircraft, Missiles, Wind Turbines, Latest Cars, and Mobile Phones.

India has 1/3rd of the total world reserve in Beach Mineral. Thus it can win China in Rare Earth production. But due to the  wrong advice in framing policy for Rare Earths at the behest of Chinese producers India prevent private players entering in the Rare Earth Field. The Net result,  India is also dependent on China. 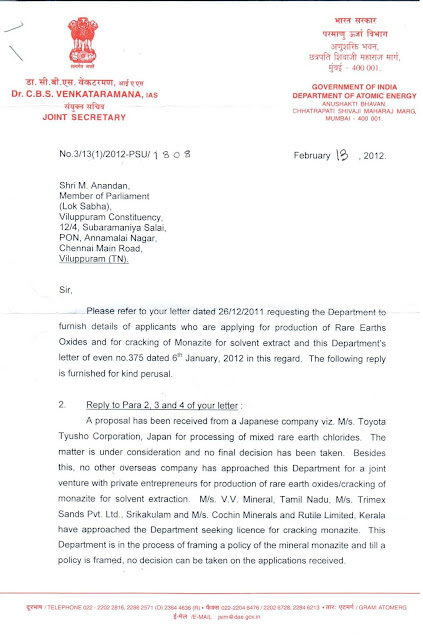 If those Permissions  had been granted, India would now be the world largest Producer of Rare Earths. This would have earned about 90,000 Crore Rupees in Foreign Exchange per annum. More than 5 lakh people would have got Employment. By implementing the Make in India Program, the Indian manufacturers  should encouraged and India can break China’s monopoly and become world No.1 producer of Rare Earths like Garnet.  This Video explains China’s monopoly and the Need for India to Produce Rare Earths”.

Our Government permit private investment even in defense. But due to Chinese producers lobbying, refused the right of Indian producers. Will Prime Minister Office look into this?