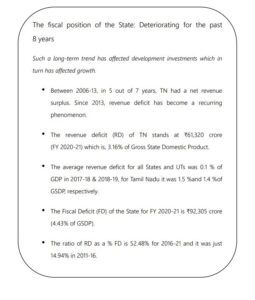 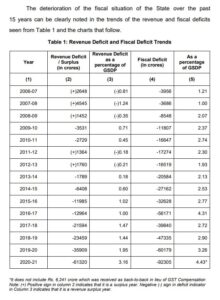 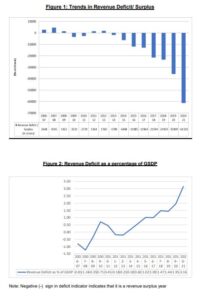 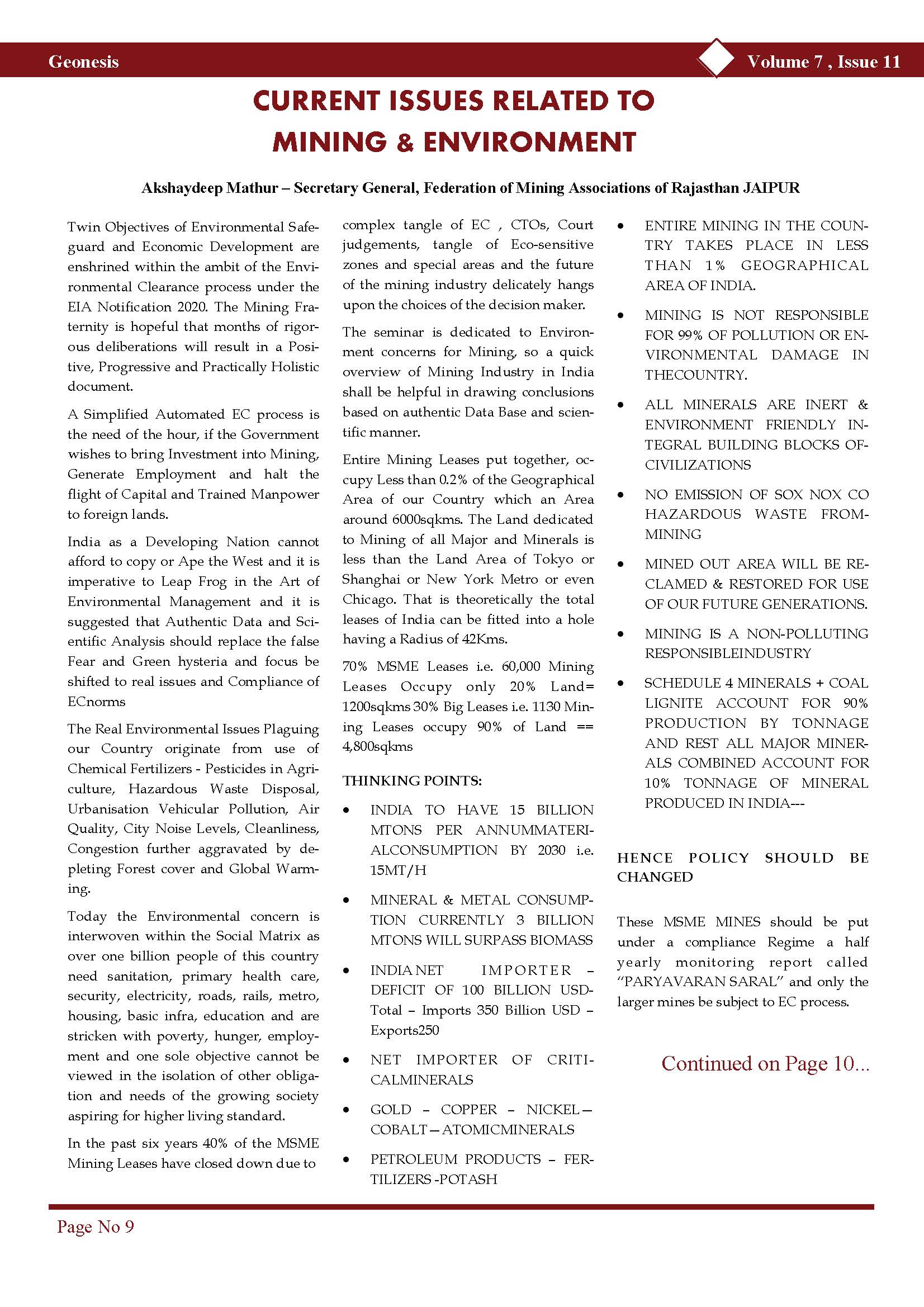 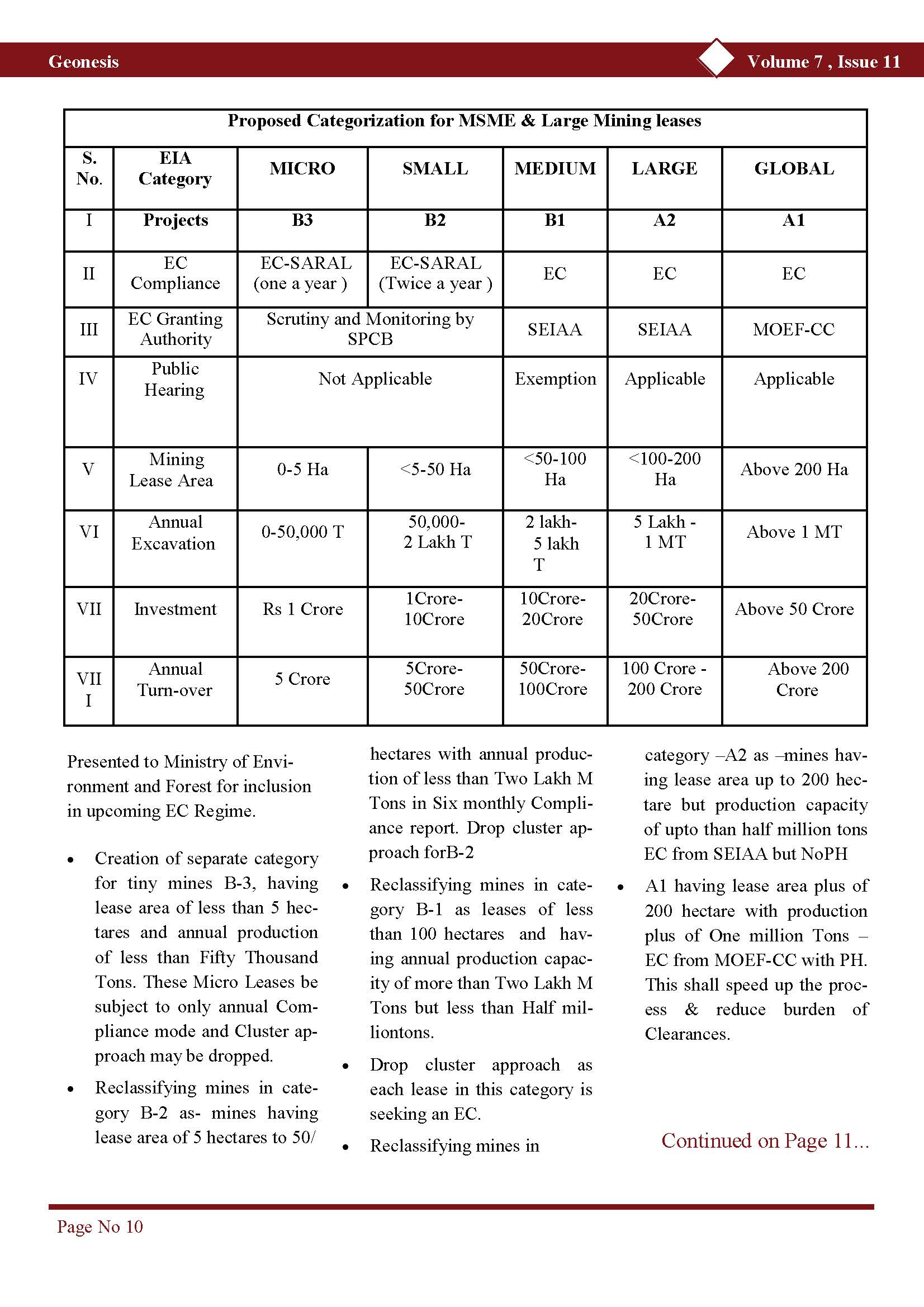 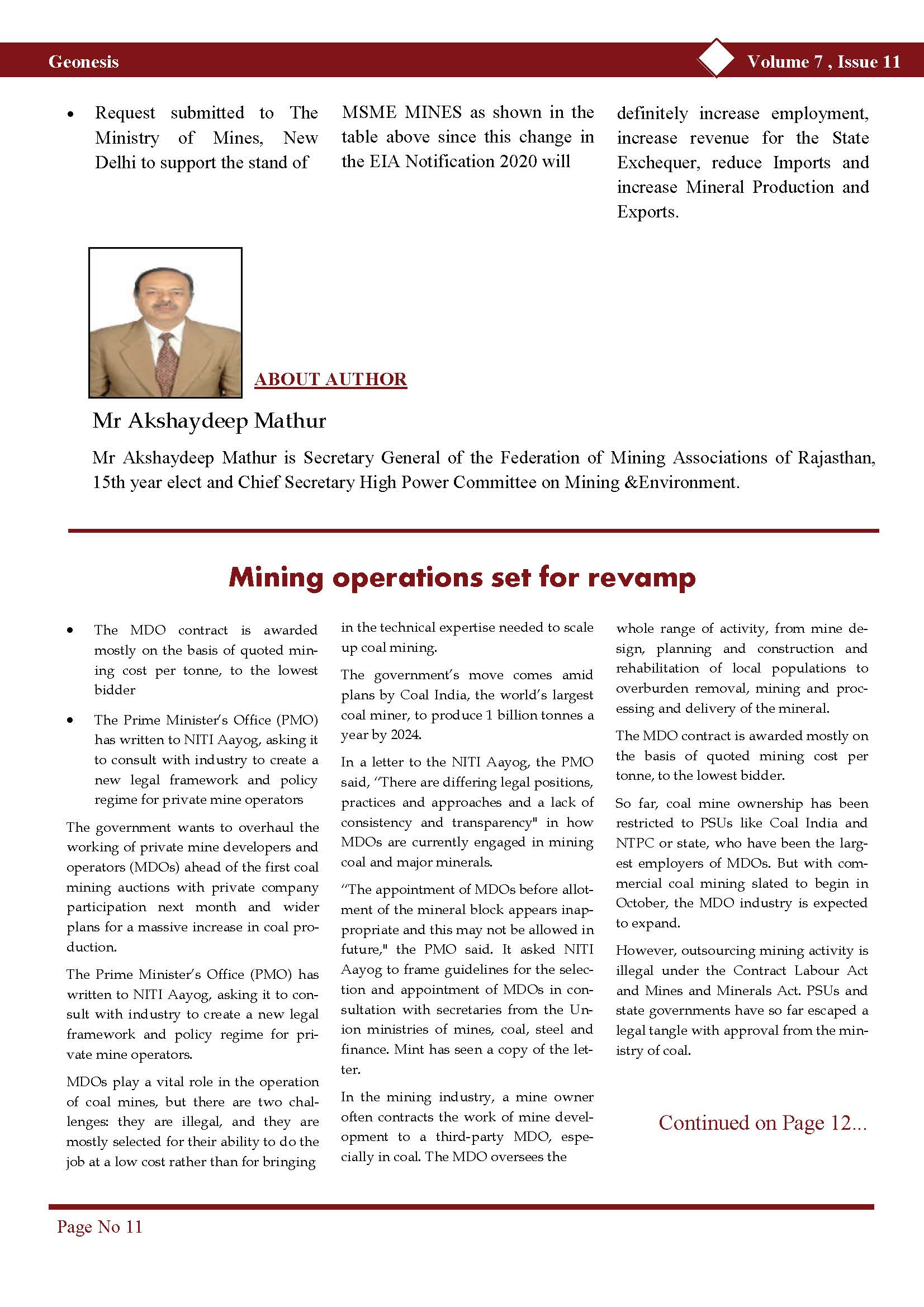 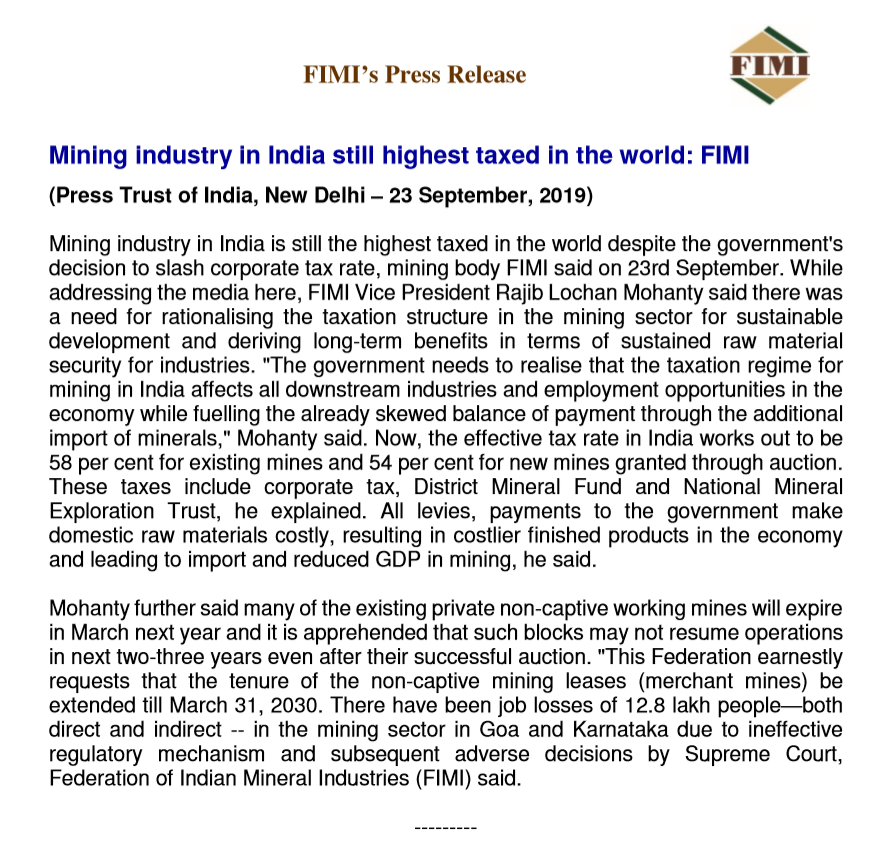 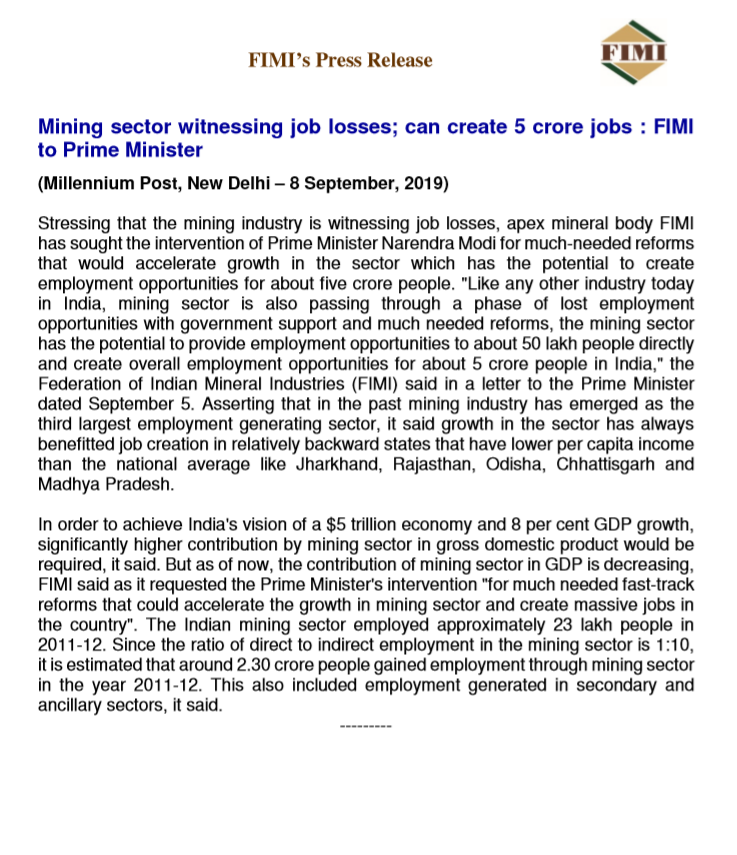 Except Water, Food, Wood and Wood products all others are made from minerals. So Mining Industry is important for the human being. It generate not only crores of employment, feed raw material for all the industries earn valuable foreign exchange to our nation in addition to huge revenue by way of tax – FIMI’s press release requesting PM to protect mining industry. 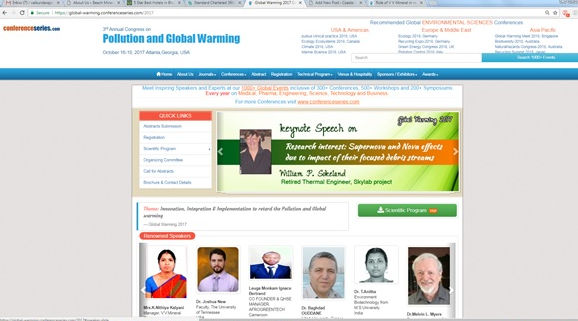 ABSTRACT: This paper highlights the importance of Rare Earths Mining in India. Monazite is the important ore and source of Rare Earth Elements (REE). The Monazite is abundant in India and found along the coast of Tamil Nadu, Kerala, Andhra Pradesh and Odisha. Monazite is found as placer deposit and deposited along with other associated heavy minerals viz. Ilmenite, Rutile, Garnet, Zircon, Leucoxene, Sillimanite etc. Although our country is blessed with more than 10.93 million tons of Monazite reserves, due to several constraints it is severely under utilized. The Monazite Mining/processing being a government monopoly, due to which REE being imported from China. Processing and Production of Monazite by private entities are not allowed in India due to co-occurence of prescribed substance Thorium. In view of the REE’s strategic application, heavy demand prevails for REE. Hybrid vehicles, Magnets, Rechargeable batteries, Catalytic Converters are few of the end uses of REE.

Rare Earth Elements (REE) are a group of 17 Elements. These elements are moderately abundant in the earth’s crust, some even more abundant than copper, lead, gold and platinum. Some elements are more abundant than many other materials, because of their geochemical properties, REEs are typically dispersed; most of them are not concentrated enough to make them easily exploitable economically. It was the very scarcity of these minerals that led to the term as “rare earth”. There are 17 rare earth elements; 15 within the chemical group called lanthanides, plus yttrium and scandium. They are classified into two types i) Light Rare Earth Elements (LREE) (More Abundant) and ii) Heavy Rare Earth Elements (HREE) (Less Abundant). 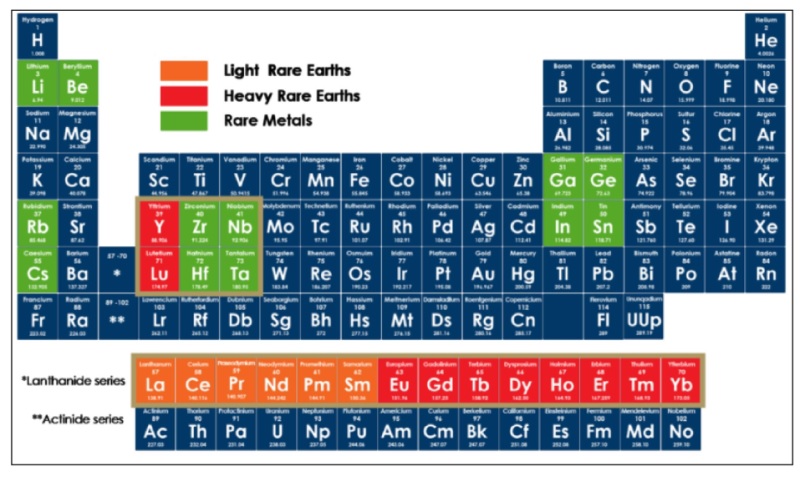 2. ABUNDANCE OF REE’S IN EARTH CRUST

Together the lanthanides, Yttrium and Scandium are commonly referred to as REE’s, although this is a misnomer since most of the REE’s are common mineral constituent as compared with other metal elements. The term “rare” is not due to availability, whereas due to the metallurgical process needed to isolate the individual metal species are complex and early technology prevented commodity-level production.

The abundance of REEs in the earth’s crust relative to other common metals is presented in Table 1.

TABLE I. Abundance of Elements in the Earth’s Crust

The major minerals of RE of commercial importance are presented in Table 2.

From the 1960s until the 1980s, the United States was the world leader in REO productions. In fact, in 1984, the Mountain Pass Mine in California supplied 100 percent of US Demand and 33 percent of the world’s demand for rare earth. In the late 1970’s, China started increasing Production of REEs, and as illustrated in Figure 3.1, rapidly because the world’s dominant producer. Active mining Operations at Mountain Pass Mine were suspended in 2002. As REE production in the US has declined, China has become the world’s leading producer of REE’s and is currently responsible for more than 95 percent Global Production. 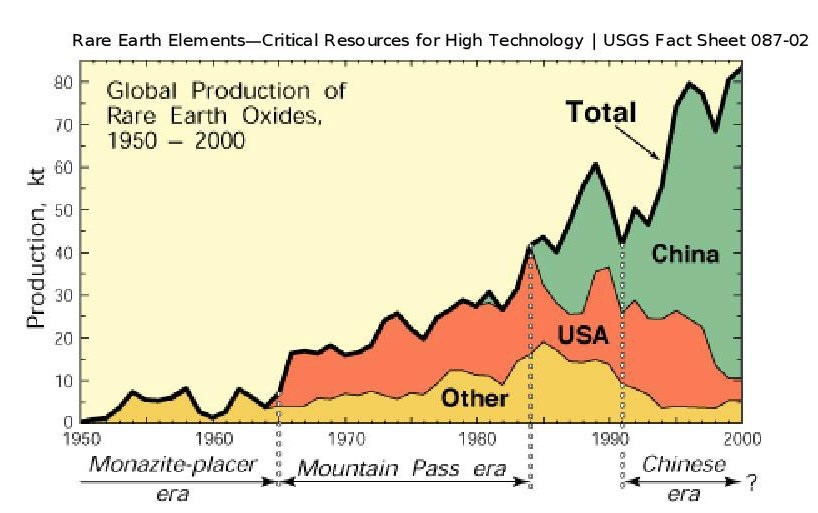 I. Major End Uses And Applications of REE

Currently the dominant end uses of Rare Earth Elements in the United States are for Automobile Catalysts and Petroleum Refining Catalysts, Use in Phosphors in Color Television and Flat Panel Displays (Cell phones, Portable DVDs and Laptops), Permanent Magnets and Rechargeable Batteries for Hybrid and Electric Vehicles and Numerous Medical Devices (See Table III). There are important Defense applications such as Jet Fighter Engines, Missile Guidance Systems, Antimissile Defense and Satellite and Communication Systems. Permanent Magnets containing Neodymium, Gadolinium, Dysprosium and Terbium (Nd Fe B magnets) are used in Numerous Electrical and Electronic components and New Generation Generators for Wind Turbines. About 75% of the Nd Fe B Permanent Magnet Production is concentrated in China. Another 22% is produced in Japan. 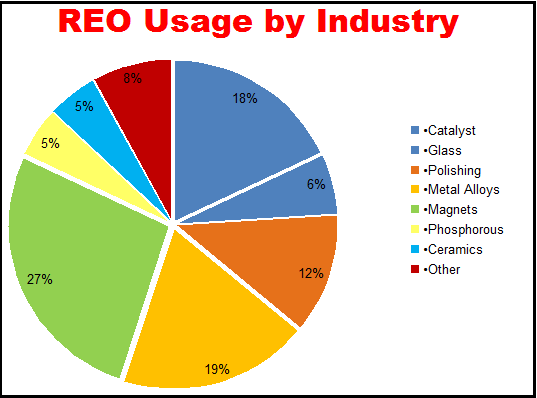 From the above it is evident that the countries, Brazil and India are having surplus REE reserves they are not keen to produce any REE.

Following are the reasons for US to control their REE production

Following is the turn of events in the monazite sector during the last 107 years in India.

V. Properties and Chemical Composition of the Mineral Monazite

Based on the study, it is inferred that now is the suitable time for India to go for Private Sector Participation in Monazite Production and Processing considering the Rare Earths Market in the World, which is dominated by China.

A.    Radiological Safety in Processing of Monazite:

The radiological safety aspect to be covered in the processing of Monazite is very simple, when it is compared with operation of Nuclear Reactors. Due to the lesser composition (in PPM level) of radioactive elements in Monazite, the radiological safety standards can be easily achieved by the Private entities and the same can be regulated by the existing radiological safety regulatory authority viz. AERB. Appointment of Exclusive Radiological Safety Officer (RSO) deputed from DAE/AERB would make the system safer.

Already Private entities who are all involved in the processing of BSM facility are holding a valid license under Atomic Energy Radiation Protection Rule, 2004.

B.    Stacking and Handling of Thorium rich concentrate:

The present scale of Mining of Beach Sand Minerals (BSM) by private entity is about 10 lakh tpa. During the Process about 50 tons Thorium concentrate is expected. The system is very simple and with a few laid down procedures, stacking and handling Thorium concentrate can be easily achieved with the aid of the regulatory authority AERB.

Heavy mineral deposits of Manavalakuruchi in the state of Travancore (now Tamilnadu) were discovered by Schomberg, a German Scientist in 1909 which was proved richer and economical compared to rest of the world. Interestingly, Mineral sands then mined from rich seasonal Beach washings for only one mineral, i.e. Monazite, which produce incandescence by infusing the paraffin mantle in a solution of thorium and cerium compounds, lost its worth due to arrival of filament lamp. During 1947, Indian first Prime Minister Pandit Jawaharlal Nehru exercised control (not banned, but restrictions) over the export of Monazite and Thorium Nitrate. However, in 1995 DAE issued a gazette notification, listing prescribed substances, including Monazite, that are subject to export licensing by the DAE.

Here it is important to mention that in 1947, India exercised control over export of Monazite “not merely a financial matter, it has international implication”.

The mineral Monazite is utilized for only commercial purpose only and not for any strategic purpose. Also, as per IAEA documents, about the national nuclear programs of different countries, does not give any indication that any country, is planning significant use of thorium either in the reactors currently under operation as also in the near future.

Thus, it is the right time for DAE to allow Private entities to Produce and Process Monazite mineral for meeting the increased demand for Rare Earths in the world with stipulations regarding safety and misuse of Thorium and Uranium.

The additional REE available by opening up will pave way for the development of downstream industries in India using REEs as the raw material which will have additional financial as well as strategic implications.

Privatization of REE – By Mr.Srinivasan